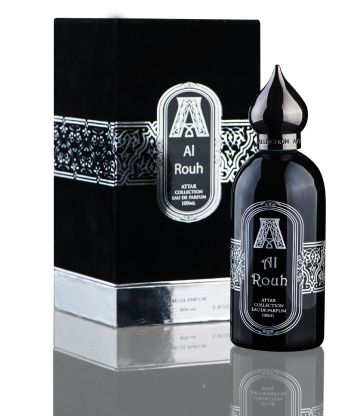 If translate from arabian into english “Rouh” you’ll get the word that means “spirit”. And truly according to the ancient legend this is the story about strong spirit of the knight of the desert. The story about brave defender and daring man who was not afraid to fight with fate. Once upon a time when in the heart of Rub-Al-Hali caravans of camel crossed the old desert roads the band of cruel robbers persecuted the peaceful civilians of the nearby oases. Everybody was scared and only one doughty bedouin decided to fight with robbers. Before the battle the bedouin went to the sacred place to pray. In that place he got the elixir of courage which helped him to defeat the enemies. It was a magic black stone bottle with secret and rare ingridients such as musk, flowers, sandal and exotic plants. With Al Rouh perfume you will reveal the spirit of adventure, courage and power!